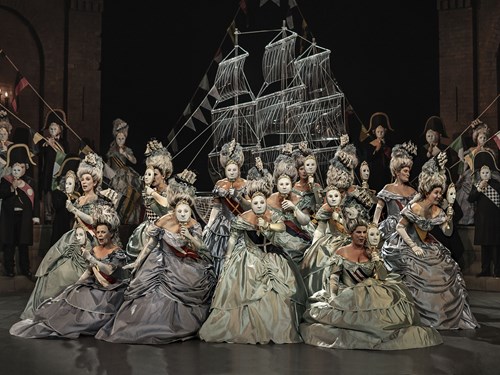 Murder on the dance floor

King Gustav is in love with his best friend’s wife, Amelia, but must pay dearly for that love. A Masked Ball is among Verdi’s most beautiful, yet also most political operas. Experience it with traditional costumes and maritime scenes inspired by Scandinavian sea trade.
Buy

When power, politics and love collide, the results can be fatal – as King Gustav III of Sweden so painfully experiences when he is shot by Captain Anckarström during a masked ball at the Royal Swedish Opera on 16 March 1792.

Verdi’s opera is about this dramatic event in world history and the events leading up to it. If you enjoy Victorian dresses, grand chorus scenes and classic set design with a maritime theme, this performance is just for you!

The opera has been called ‘Verdi’s Tristan and Isolde’ and may very well include the most beautiful duet ever written by the Italian opera master – when Amelia and Gustav declare their love for one another.

The stage is filled with the top echelon of soloists, with Marita Sølberg as Amelia, Matteo Lippi as King Gustav and Yngve Søberg as Captain Anckarström. The new music director of the Oslo Opera House, Edward Gardner, is in charge of the musical direction.

A story about censorship

Killing a king onstage was radical and unthinkable in Italy in the 1850s. When Verdi’s opera premiered in Rome in 1859, the action was therefore placed in 17th century Boston and with a governor instead of a king.

We are performing the original version, where the story takes place in Stockholm.