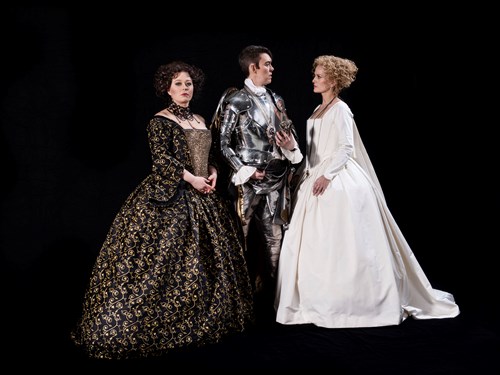 A bittersweet encounter between young love and mature melancholy

Was it just a dream?

The curtain rises to the afterglow of a lover’s night, where the Marschallin, Princess Werdenberg, bids farewell to her young lover Octavian. Baron von Ochs asks her if she knows of any nobleman who could deliver a silver rose to his intended, the young Sophie, and thus commence wooing her. The princess suggests Octavian. But when he meets Sophie, they fall so madly in love that nothing can come between them. Behind stands the mature woman, who realizes that she has to let go of her lover, her dream and beautiful youth itself.

The renowned opera director Sir David McVicar has created the set design and the production has received public and critical acclaim at a number of British opera houses.

Richard Strauss wrote Der Rosenkavalier in 1911, immediately after his modernist Elektra. The experienced composer returns to the classic Mozart-esque opera, with universal character types who remind of Cherubino and Countess Almaviva from the Marriage of Figaro, but also the older Bartolo and the young Rosina from Rossini’s Barber of Seville.

Hugo von Hoffmannsthal, who wrote the text, set the events in an aristocratic environment in Vienna around 1740, during the reign of Maria Theresa. Strauss played with styles, times and the fruits of a long blooming opera history. «It is like butter!» he exclaimed during the process of writing this opera.

The result became Germany’s greatest operatic success of the 20th Century. Extra trains were scheduled between Berlin and Dresden, where the opera premièred. Since then, the public have continued to love Strauss’ strange and beautiful playful opera.

Première discussion
Free introduction one hour before the performance