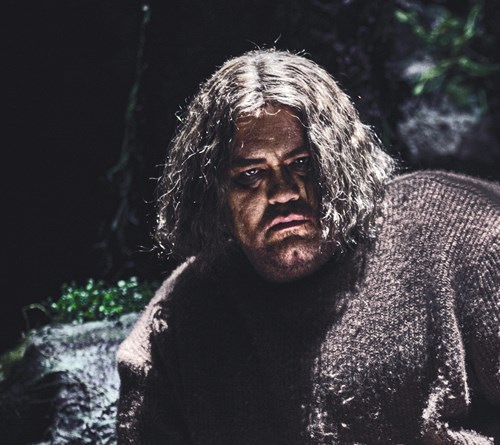 La donna è mobile. The woman is fickle. This is proclaimed by the duke in Rigoletto, while at the same time getting his fill of the opposite sex. In Verdi’s masterpiece, we encounter a tough men’s club, a father’s great love – and some of the best melodies ever written.

It reeks of hunting, power and wet moss. An ugly hunchbacked man wanders among the trunks of dark pines, bearing a secret. Hidden away at home is a daughter he loves more than anything on earth. Among the guys, he acts tough in order to be liked, especially by his boss, the duke. When Rigoletto realises that the duke has also been together with his daughter, he commits a horrible crime, one that has tremendous consequences.

Rigoletto, Il Trovatore and La Traviata are referred to as Verdi’s trilogia popolare. This is nothing short of a hit list. Thanks to these three works, written in the course of only two years, Verdi went from being a popular opera composer to the King of Italian Opera in the mid-1800s. Verdi shows what he is made of: magnificent ensemble scenes, distinct character portrayals in the music and catchy melodies, such as Gilda’s beautiful aria and the duke’s ‘La donna è mobile’.

When Verdi wrote ‘La donna è mobile’, he realised that a hit was born and feared that the melody would spread through the streets and canals of Venice before the premiere in 1851. So, he made the tenor who would be playing the duke swear not to hum or whistle the tune outside of rehearsals. For the same reason, the orchestra did not receive the sheet music until a few hours before the curtain was to go up.

And Verdi was right. The day after the premiere, people were humming ‘La donna è mobile’ on the streets of Venice – and have done so ever since. The opera was an immediate success and Rigoletto continues to be an international opera hit to this very day.

Since L'incoronazione di Poppea, Il ritorno di Ulisse in patria and Lady Macbeth from Mtsensk, Ole Anders Tandberg has enjoyed international success as an opera director with such works as Wozzeck at the Deutsche Oper Berlin and La bohème at the Opernhaus Zürich. Together with his team, costume designer Maria Geber and lighting designer Ellen Ruge, he has created a completely new Rigoletto that reveals the darkness and human brutality in one of the world’s most popular operas.