The Marriage
of Figaro 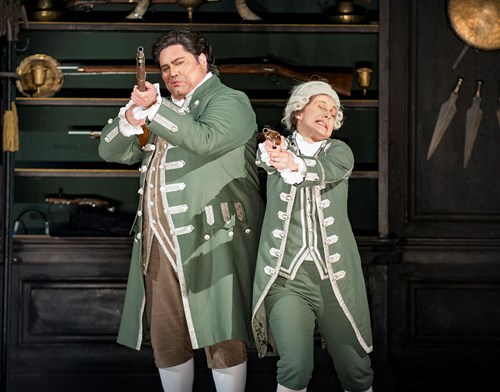 What happens when the boss insists on sleeping with your beloved before the wedding bells ring? This is what happens to Figaro when the count insists on bedding his fiancée, Susanna. The Marriage of Figaro is packed with intrigue, complications, comedy and Mozart’s fantastic music, performed by some of the very best Norwegian singers.

It is for good reason that The Marriage of Figaro is one of the most popular operas in the world. Not only is Mozart’s music fantastic, but the emotions evoked by the story are very familiar, from falling in love and raw desire to jealousy, anger and sorrow and, finally, to the serenity of being able to forgive.

Figaro is to marry the countess’ chambermaid Susanna. When Count Almaviva demands his right to bed the young and beautiful bride who lives in his house, the bridegroom sees his chance to teach the boss a lesson. Figaro and Susanna are aided by the jealous countess, as well as the teen Cherubino, full of hormones and emotions. 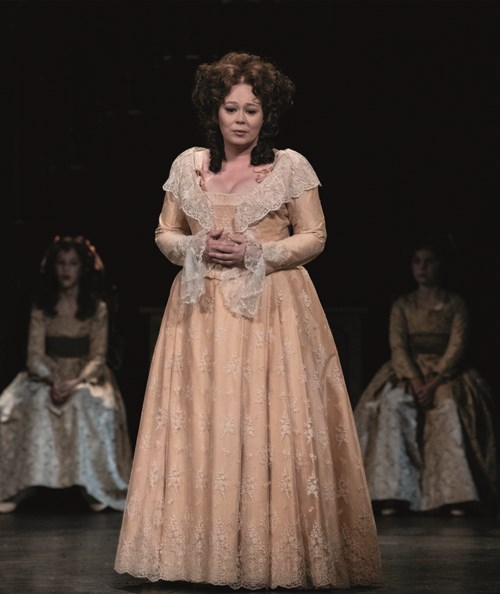 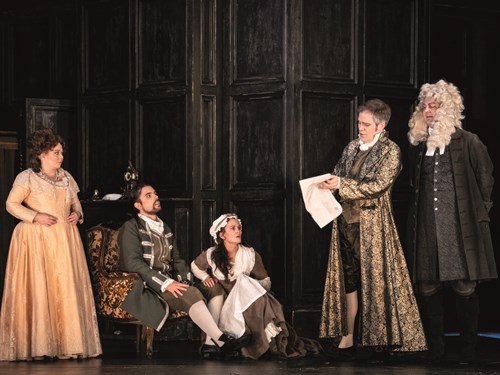 Thaddeus Strassberger’s version has enjoyed full houses since its premiere in 2010. The scenography and costumes portray a large estate in Spain in the 1700s, with swarming and fairytale-like scenes. We enjoy a dream team of Norwegian singers, including Mari Eriksmoen and Mariann Fjeld Olsen som Susanna, Marita Sølberg as the Duchess, Audun Iversen as the Count and Ingeborg Gillebo as Cherubino.

Figaro, well known throughout the region as the ‘Barber of Seville’ and his young bride, Susanna, are to marry today. He is now the valet of Count Almaviva, and she the maid of his wife, Countess Rosina, and they are senior members of a sizeable household staff. Susanna tells Figaro that the Count has been trying to seduce her. Figaro, hurt and angered, plots to teach the Count a lesson. Dr Bartolo arrives with his former servant and duenna of the Almaviva’s children, Marcellina. She is determined to be repaid for an old loan made to Figaro. According to the contract, Figaro must either repay her or else marry her. Marcellina accidentally confronts her younger rival Susanna and is further incensed. Interrupting Susanna’s busy day, the young page Cherubino enters. He wants Susanna to plead on his behalf with the Countess to reinstate him in the Count’s good graces—the Count has banished him after finding him with the gardener Antonio’s daughter, Barbarina. They hear the Count approaching, and Cherubino hides. The Count attempts to arrange a rendezvous with Susanna, and he, too, hides when Don Basilio, the music master at Aguas Frescas, arrives. As Basilio gossips with Susanna about Cherubino’s infatuation on the Countess, the jealous Count reveals himself. As he tells how he found Cherubino with Barbarina, he discovers Cherubino in yet another compromising situation. Figaro has gathered the peasants from the estate to hail the Count’s decision to abolish his ancient right to deflower his female servants on the night of their wedding; he enters and begs the Count to marry him to Susanna immediately. Using Cherubino as a distraction, the Count avoids an instant wedding by instead ordering the young page to join his personal regiment in the army and summarily dismisses the peasants. Figaro paints a vivid portrait of how the gallant Cherubino’s life is soon to change.

The Countess is heartbroken by her husband’s repeated infidelities. As Susanna dresses the Countess for the day, Figaro arrives to update the ladies on his scheme. He has sent the Count an anonymous note telling him that the Countess is expecting a lover while he is out hunting. Figaro hopes to keep the Count embroiled in this ruse to deflect his attention from Marcellina’s troublesome claim. Figaro also asks Susanna to arrange a rendezvous with the Count later on that evening in the garden. He plans for Cherubino, dressed as a girl, to go in Susanna’s place. The Count will be humiliated and forced to mend his ways. As Rosina and Susanna begin to disguise Cherubino, Susanna leaves the room for a moment. The Count arrives in a jealous fury, having read the anonymous note. He knocks on the bedroom door and finds it locked. A terrified Cherubino locks himself in the closet while the flustered Countess then unlocks her door for the Count. Susanna re-enters, unnoticed. The Countess refuses to unlock the closet, so the Count leaves, taking the Countess with him, in search of tools to break the lock. Susanna helps the page escape through the window, and then she hides in the closet, surprising both the Count and Countess when they find her there. Figaro arrives and tries to get everyone to come to the wedding festivities. When Antonio the gardener enters and claims someone has jumped out of the window, Figaro takes the blame. Marcellina bursts in with the notary Don Curzio, Bartolo and Basilio and demands her case against Figaro be heard.

As the Count tries to clear his head for the impromptu deliberations over Marcellina’s case against Figaro, the Countess alters Figaro’s plan: Susanna will ask the Count to meet her in the garden that evening, but the Countess herself will go in her place. The Count eagerly agrees to meet Susanna, but he hears her tell Figaro that they have already “won the case” and he is once again filled with suspicion. Cherubino is spirited away by Barbarina in an effort to avoid the Count for even a few hours longer. Rosina, alone in her chamber, laments that she is reduced to the petty plots of her servant; she desires only to be loved and adored again.
Don Curzio, the notary, has determined that Figaro must either pay off the old debt or marry Marcellina. Figaro claims that, as the son of an aristocrat, he cannot marry without the consent of his parents, and since he was a foundling, he doesn’t expect to be able to find them. Hearing the story of his childhood abduction, Marcellina realizes that she is Figaro’s mother and reveals that his father is Dr Bartolo. Susanna unexpectedly appears with perfect timing, bringing the money the Countess has given her to pay off Figaro’s debt. Enraged at seeing Figaro embrace Marcellina, she is placated when she understands the true situation. A double wedding is declared, so that Marcellina and Bartolo may legitimize their relationship and son as well.
Antonio once again disrupts the plans. He informs the Count that Cherubino is indeed still at Aguas Frescas, against the Count’s previous orders. The Countess dictates a note for Susanna to give to the Count, specifying the location of their supposed rendezvous later that evening in the garden.
During the wedding festivities, Susanna slips this note to the Count. The Count is to return a pin used to seal the note as an acknowledgement that he will meet her. He gives the pin to Barbarina to give to Susanna.

Barbarina is looking both for Cherubino and for the pin the Count gave her. She tells Figaro what has happened, and he believes that Susanna plans to betray him. Crushed, he hides in the garden and plans his revenge. Susanna baits the trap and sings of her love for the Count, as the Countess transforms herself into the guise of Susanna. Their scenario to fool the Count is disrupted by the arrival of Cherubino. Figaro eventually realizes what is going on and gets even with Susanna by wooing her in her Countess disguise. Mistaking Susanna for his wife, the Count attempts to “expose” her, but when the real Countess appears, the Count is the one who must ask for forgiveness.