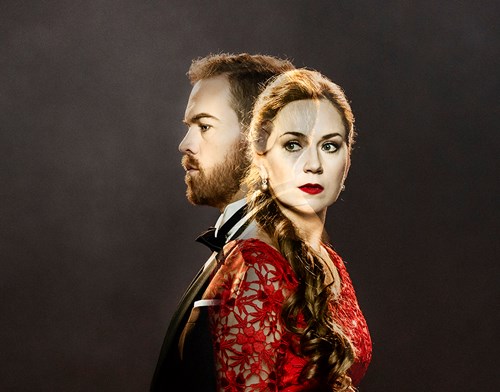 Deep down, we’re all alone

Tchaikovsky’s romantic opera is a close encounter with intense, youthful love. At the same time, Eugene Onegin is a powerful portrayal of something we have all experienced – the passing of time, the chances we didn’t take and the fact that, deep down, we’re all alone.

It’s called Eugene Onegin, but the title of Tchaikovsky's opera could just as well have been Tatjana Larin. After all, it’s as much her story as it is anyone else’s. It’s about when she sees him for the first time – the handsome, well-travelled and self-confident Onegin. And it’s about when, 16 years later, he sees Tatjana – a modern, well-read and beautiful woman.  But by then it’s too late.

It’s a bitter cold winter. We’re at the Larin Family estate outside of St. Petersburg, where Mrs Larin lives with her daughters, Olga and Tatjana. While Olga dances and enjoys life, the contemplative Tatjana has escaped into the world of books. When Olga’s fiancee Lensky introduces Tatjana to his friend Onegin, the lives of the four youths change forever.

Russian opera at its best

Eugene Onegin is considered the most popular Russian opera. It is the brainchild of two giants in Russian cultural history, the writer Aleksandr Pushkin and the composer Peter Tchaikovsky. But while Pushkin identifies with Onegin, Tatjana is the one closer to Tchaikovsky’s heart. This can clearly be heard in the music he has written for her. The opera opens with Tatjana’s melody, which later expands into her grand, beautiful aria during the first act, when the brave girl writes a letter to Onegin and one of the most intense solo scenes for soprano voices.

Eugene Onegin encompasses two impressive ball scenes, impressive arias and impressive sounds. Yet the opera is also an intimate one that takes us into the remote corners of the human mind. When it first premiered in 1879, it was performed by students of the Moscow Conservatory. Tchaikovsky referred to the opera as ‘lyrical scenes’ and could not imagine it being performed on major opera stages. He was wrong. Only two years later, in 1881, Eugene Onegin premiered at the Bolshoi Theatre in Moscow and has become an established opera in opera houses around the world ever since.

In our new production, director Christof Loy takes the intimate and lyrical qualities of the work seriously and brings us to the very heart of this personal drama.

A judge of character

German director Christof Loy is known for his strong directing skills, clear from his critically acclaimed Wozzeck with the Norwegian National Opera & Ballet in 2017, also with Audun Iversen in the title role.  In May 2017, Loy was proclaimed Best Director during the International Opera Awards. In 2008, he received the Faust Award for Così fan tutte at Oper Frankfurt and has been voted three times as ‘Opera Director of the Year’ by the magazine Opernwelt.

The young Tatyana lives with her sister Olga, her mother Larina and the old nurse on a farm in the countryside, far away from the big cities like St. Petersburg or Moscow. Tatyana loves this idyll, where she can feel like a child, where she dreams of a life more than actually living it.

Until now, her only knowledge of love and the pain of love came from books, but this changes when Lensky, who lives nearby, brings a friend to visit, Eugene Onegin.

A lot is said about this new neighbour, that he only reluctantly moved to the countryside to care for his seriously ill uncle, that until recently he was an unscrupulous and cynical man about town in St. Petersburg society.
Tatyana is immediately attracted to the stranger, and so writes him a passionate love letter a few hours later.

The very next morning, Onegin turns up in person to tell her that he is not made for a lasting love affair, and certainly not for marriage. But Tatyana remains under his spell for several months.

When a celebration is held on Tatyana’s name day, Onegin gets carried away and flirts with her sister Olga in public, right in front of her fiancé Lensky.

Discouraged, Tatyana suffers silently. She finds a soulmate in Lensky, who breaks off the friendship with Onegin in front of all the guests and goes so far as to challenge him to a duel. Onegin begins to realise that he has gone too far. Yet he accepts the challenge.

Onegin realises that he will have to face the consequences of his past life and above all, he has to understand that disasters inevitably have to run their course.

Lensky dies in the duel, Onegin must see himself as the guilty party. Again, he is haunted by images of fleeing from himself. Again, he tries to return to a superficial life, but in vain.

But Lensky’s shade does not leave him in peace: nor does Tatyana, whose soul he has broken.

And finally, fate confronts him with Tatyana, who in the meantime has married Prince Gremin and left all girlish naivety behind. In his godforsaken loneliness, he believes that he now loves her passionately and wants to win her over. He has not learned to let go. So Tatyana must now reject him and forces him to live with his loneliness.