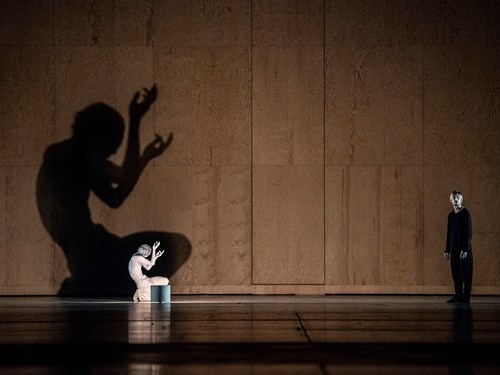 Things turn imaginative and spectacular when the Norwegian National Ballet’s house choreographer Alan Lucien Øyen is let loose on Shakespeare’s Hamlet. This autumn, we are presenting the production in a special version adapted around the coronavirus.

When The Hamlet Complex had its world premiere in 2018, it was like a spirited, contemporary Hamlet. “This is a production you have to see,” said Aftenposten.

It is absolutely crazy and more than a little imaginative

Now, after an extraordinary spring, the Norwegian National Ballet’s house choreographer Alan Lucien Øyen has reimagined the piece – in a mix of dance, theatre and film.

The piece is abridged, but is still a place where Shakespeare’s text meets popular culture.

The characters are the same as in 2018 – led by the Norwegian National Ballet’s principal dancer Silas Henriksen as Hamlet and actress Kate Pendry in a central role as Queen Elisabeth the First.

Found the Oedipus complex in Hamlet

We also meet Freud, who discovers the Oedipus complex in a therapy session with Gertrude, mother of the young Hamlet.

The Norwegian National Ballet’s house choreographer Alan Lucien Øyen is sought after all over the world. This year he was due to have world premieres at both the Palais Garnier in Paris and Berlin’s Komische Oper, but then the coronavirus pandemic struck.

Now an audience of 200 people at a time will have the chance to experience Øyen’s distinctive performance art on the Main Stage.

The music was written by the award-winning film composer Henrik Skram, and the choreography was developed in collaboration with the dancers.