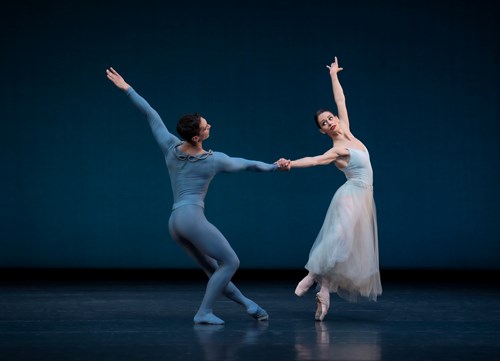 Bournonville is to Denmark what George Balanchine is to the United States. For two weeks starting 14 May, you can experience Balanchine’s famous Serenade and Tschaikovsky Pas de Deux together with a unique Bournonville bouquet – absolutely free.

«Serenade – surely the most miraculous of all ballets,» wrote The New York Times in 2014.

George Balanchine (1904–1983) is one of the world’s most famous choreographers, known for cultivating the movements of classical ballet. In his ballets, the steps and music shine in their own right, without any plots or unnecessary frills.

Serenade (1935) was the first ballet created by the Russian in the U.S. It combines brilliant dance, tempo and freedom to the romantic music of Pyotr Tchaikovsky – and the fluttering of 26 dancers.

About three women and a man

Principal dancers Melissa Hough, Maiko Nishino and Whitney Jensen are among the stars you can admire.

Although Balanchine liked to deny that his ballets were ‘about’ anything, some believe that Serenade revolves around a man and the three women in his life: his wife, his mistress and the one that got away.

Tschaikovsky Pas de Deux has been referred to as an «eight minute-long display of bravura and technique».

The music was originally part of the third act of Swan Lake and was later omitted. After hearing Tchaikovsky’s ‘lost’ piece, Balanchine used it to create his own pas de deux, a duet featuring speed and musicality, airy flight and impressive lifts.

From 14 May, soloists Melissa Hough and Yoel Carreño will be showing off their talent and, from 3 June, it will be Whitney Jensen and newcomer Leonardo Basílios’ turn.

The unbearable lightness of ballet

«In dancing Bournonville, the dancers often feel they spend more time in the air than on the floor,» wrote ballet star Erik Bruhn about Denmark’s greatest choregrapher, August Bournonville (1805–1879).

Bournonville danced in his father’s home country of France before returning home and creating a unique Danish tradition, one distinguished by detailed footwork and an almost floating lightness. In his ballets, the male dancer is just as important as the female one and the story is about regular people.

The former head of the Norwegian National Ballet, Dinna Bjørn, is known as the world’s leading Bournonville expert and has now returned to Oslo to treat us to a unique and entertaining Bournonville bouquet.

The performance comprises an excerpt from the Dane’s Italian ballets Napoli, Flower Festival in Genzano and Ponte Molle.

Principal dancer Gakuro Matsui, Lucas Lima, Shaakir Muhammad and Riccardo Ambrogi are among the dancers who perform in the Bournonville style, together with Leyna Magbutay, Natasha Jones, Daniela Cabrera and others.

The performance is available free of charge 14–28 May (and with a new cast 3–17 June). Recorded by M12, with imaging editing by in-house choreographer Alan Lucien Øyen.

We know Dinna Bjørn best as the former Artistic Director of the Norwegian National Ballet and for her rendition of The Nutcracker. But she is also a world-famous Bournonville expert and has now returned to Oslo to bring the joy of ballet with a capital B to new audiences. 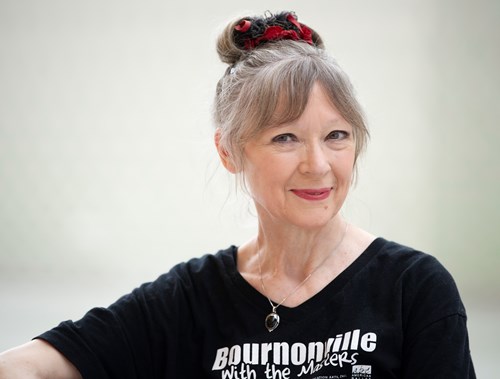 “Thank you so much for the excellent work. It has been pure pleasure to work with all of you,” wrote Dinna Bjørn on a drawing for the dancers at the end of the recording of her ‘Bournonville bouquet’, one of the three works in Balanchine + Bournonville. Around the same time, I met her in an empty foyer to learn more about what and who Bournonville (pronounced boor-nuhn-vil) was and is today.

What is so enjoyable about Bournonville?

“To the audience, Bournonville is synonymous with the joy of dance. It should be a pleasure to watch and make you feel included and connected. Bournonville is challenging for the dancers, but it also brings them much joy,” explains Dinna and I do believe she is smiling behind her face mask.

August Bournonville lived 1805 to 1879. He studied and danced in his father’s home country of France before returning to Denmark and becoming a Ballet Master with the Royal Danish Theatre – and creating a unique style that is still very much alive.

“The Bournonville style is a living tradition. Stage and dance techniques have evolved, as have audience tastes, which has affected the ways in which Bournonville has been danced over the years. But the steps are all the same,” explains Dinna.

According to Danish ballet star Erik Bruhn, “In dancing Bournonville, the dancers often feel they spend more time in the air than on the floor.” Is that true?

“Yes, that’s exactly how it feels. Bournonville means lots of jumping and large leaps, which we refer to as allegro dance. There is not much of the calm and slow adagio dance. The upper body is graceful and natural, while the legs are energetic and dynamic, with intricate footwork. It’s difficult to perform – but it needs to look easy!”

What about all of those leg kicks?

“Bournonville refers to them as vigour or attack. The feet seem to have a life of their own and represent the rhythmic, while the upper body represents the melodious and harmonic.”

Is it true that Bournonville considered female and male dancers to be equals?

“Yes and no. Privately, he was a male chauvinist. He believed that women belonged at home and that domestic responsibilities came first. But on stage, he made them equals in the sense that he had the male dancers do just as much as the female ones,” says Dinna.

“He protested against the trend of placing men in the background or reducing them to a support for the women. As a result, the Bournonville repertoire is challenging for male dancers.”

And he choreographed the leading roles for himself?

“Yes. Until he retired as a dancer in 1840, he was the leading solo dancer and choreographed the leading roles for himself. You often see that he has included a wonderful musical conclusion to a solo that encourages applause for the male soloist – but not the female one,” chuckles Dinna.

Balanchine was inspired by Bournonville

A hundred years later, George Balanchine (born in 1904) said that “The ballet is a purely female thing; it is a woman, a garden of beautiful flowers, and man is the gardener.” “But even though they did not agree about gender roles in ballet, there are quite a few connections between the two,” says Dinna.

“Balanchine was very inspired by Bournonville. Balanchine spent two years in Copenhagen as a Ballet Master and choreographer and even admitted himself that he was inspired – especially by the intricate way in which Bournonville uses music,” explains Dinna.

“Their choreographies look very different today. Balanchine uses high arms and hip twists, which Bournonville would have found vulgar. But many of Balanchine’s more intricate steps, such as in Tschaikovsky Pas de Deux, are clearly inspired by Bournonville.”

“Speaking of ‘vulgar’, Bournonville was a bit of a moralist,” says Dinna.

“Bournonville is eager to educate us,” says Dinna. “His moral was that if you make the right decisions, are loyal and true to the laws of society, you will be just fine. He was also religious.”

He portrayed common people on stage. How special was that?

“That was unique. In France and Russia, the stories were still about princesses, princes, emperors, czars or supernatural beings like fairies and trolls.

“He was also romantic in the sense that he set his ballets in foreign countries with exotic elements and a plethora of national dances. La Sylphide was set in Scotland, Abdallah in Basra and Napoli and Flower Festival in Genzano and Ponte Molle were his Italian ballets.

And it is these Italian ballets that make up the ‘Bournonville bouquet’, right? What more can you tell us about them?

“The choreography in these ballets expresses the same thing and I hope that the audience will experience them as a whole. It is intended as a divertissement, as entertainment in which the dancers perform for and with each other – and root for each other,” she explains.

Passing on the legacy to new generations

Dinna Bjørn first took an interest in Bournonville when she was dancing with the Royal Danish Ballet, which she joined at the age of 16.

“I realised that his style was a good match for me personally and for my dancing style. I also thought it was fascinating to dance a traditional choreography that was inherited directly from him and I learned to read his notation language. I gradually created my own notation system for his choreographies and started to work as an instructor alongside dancing, first in Copenhagen and later on in the U.S. I specialised further and, today, there are a handful of us who teach the Bournonville style.”

She is grateful to those who passed down his legacy to her.

“Now it is my turn to make sure that the next generation also learns this tradition,” she says.

Is there much interest in Bournonville internationally?

“Interest comes and goes. It started when the Royal Danish Ballet travelled to London and the U.S. in the 1950s and 60s. A new revival took place from 1979, when we celebrated the 100th anniversary of his death with a major festival in Copenhagen. People came to the festival from around the world, especially the U.S. Interest has actually remained the same ever since.

Inadvertent Bournonvillification through The Nutcracker

“Bournonville is actually to blame for my being here! Yet I didn’t put on many Bournonville productions when I was Artistic Director of the National Ballet.

But over 400,000 audiences have a relationship with your version of The Nutcracker, which was performed here from 1994 to 2015. Perhaps we witnessed a bit of the Bournonville legacy without knowing it?