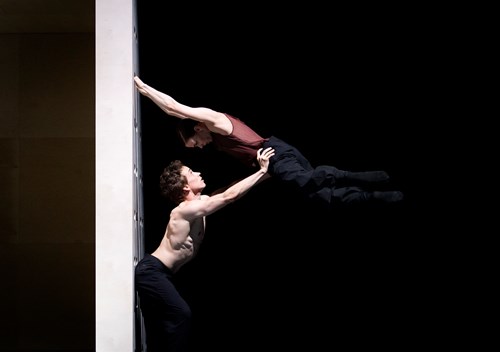 The Norwegian National Ballet wants to not only dance the classics, but create new ones! In 2020, we established the workshop company, a development and presentation arena for ten new female choreographic voices. Here, some of Norway’s most promising choreographic talents are given the opportunity to pitch new projects and help to develop and implement them.

As a choreographer, Lisa Colette Bysheim wants to challenge the established social codes. Bysheim's In-Betweenness is a poetic investigation of power. Two dancers move through a liminal space of transitions. The sound design reflects the familiar and the distorted, transformed and manipulated by the dancers themselves. Gravity throws them in and off balance while playing with nuances of power – through movement, text and voice.

In VOYEUR, dancer Silas Henriksen and photographer Cecilie Semec explore the intersection between the human need for belonging and our urge for individualism and excitement. How can we understand this contradictory relationship between desire and safety? The inspiration behind the piece is Kohei Yoshiyuki’s photographs from the 1970s depicting the sexual revolution in Asia. VOYEUR takes shape as a duet between Henriksen and Douglas Letheren – and just as Yoshiyuki viewed his subjects through the lens of a camera, Semec is present on stage with her camera. The film is projected directly onto the screen behind the dancers, becoming one with the choreography.

Samantha Lynch of the Norwegian National Ballet debuted as a choreographer with A Boléro on the Main Stage during spring 2021. Her new work revolves around the phrase ‘just grin and bear it’, being vulnerable yet staying the course and moving forward – even when circumstances tell you otherwise. The piece confronts the staged, covered-up and so-called perfect ideal. After all, is it not the raw, honest and unfiltered side of us that is the most beautiful?

Norwegian National Ballet dancer and choreographer Samantha Lynch has created several works, including C aura for the Chamber Dance performance on Second Stage in 2020, A Boléro for the Main Stage in 2021 and for: jake – created in partnership with Douwe Dekkers – which was selected for the Royal Ballet’s International Draft Works in London. Lynch is also the initiator behind the Norwegian National Ballet dancers' choreography platform NNB RAW, which she has been running for several years now.

Cecilie Semec focuses on the intersection between film and dance. She has worked together with dancer Silas Henriksen on several occasions and their most recent film, APART, will premiere during the opening exhibition at the National Museum in 2022. Semec’s work often reflects a sense of natural light and movement and she has presented films during the film festivals in both Cannes and Venice. Her most recent cinema project was the critically acclaimed Lyset fra Sjokoladefabrikken, a collaborative project with director Dag Johan Haugerud.

Silas Henriksen is a principal dancer with the Norwegian National Ballet. He spent five years dancing with the Nederlands Dans Theater in The Hague (2010–2015), where he worked closely with the choreographer duo Sol León and Paul Lightfoot and toured the world with their performance Sehnsucht/Schmetterling. Since joining the Norwegian National Ballet, he has danced several major roles in works by Kylián, Spuck, MacMillan and Ekman, among others. Henriksen has also gained attention for his collaboration with artist Nils Bech.

Dancer and choreographer Lisa Colette Bysheim has created several interdisciplinary works combining dance, performance, live music and film, such as ME(et) YOU (2016), Fugue -fju:g/ (2016), Ekko I (2017), Variations of Suspension (2018), Like We Were Together (2018), Ekko II (2019) and If Only (2021). As a dancer, Bysheim has performed in works by Mia Habib, Yaniv Cohen, Ida Frømyr Borgen and Roskva Yasmin Andersen, among others. In her choreographic work, language and ambiguity are distinct features, in which elements of improvisation, the unknown and the chaotic are woven together into a modern creation.