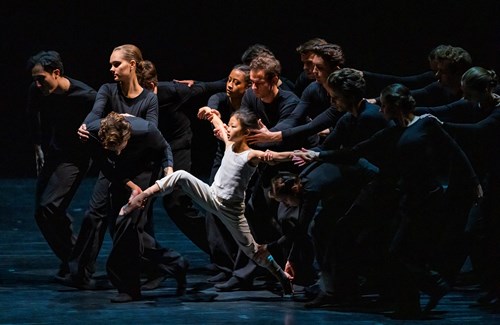 Powerful and picturesque portrayal of the greatest drama of our time

The painfully relevant refugee crisis is on the agenda when the Norwegian National Ballet performs a full-length production with Crystal Pite, one of the leading choreographers of the 21st century.
Buy

The refugee crisis is one of the greatest humanitarian crises of our lifetime. In the award-winning Flight Pattern from 2017, Crystal Pite portrays a human catastrophe, with her distinct language of movement and in a fearless and empathetic manner. Parallel to the expansion of the work from one to three acts, Europe once again finds itself in a situation that was the springboard for Flight Pattern, with millions of people being forced to leave their homes.

A refugee crisis is also a children’s crisis: every five seconds, a new child is forced to flee. The newly created second act is rooted in the UN Convention on the Rights of the Child and gives refugee children a voice. The performance space is filled with dancers of all ages from the Norwegian National Ballet.

Flight Pattern was Pite’s very first work for The Royal Ballet in London. This accomplishment made this Canadian choreographer the first woman in 18 years to choreograph for the ballet house’s main stage when the work premiered in 2017.

The large-scale ensemble work was met with great enthusiasm among critics and won the Laurence Olivier Award for Best New Dance Production. Based on the one-act Flight Pattern, Górecki’s entire ‘Symphony of Sorrowful Songs’ is being danced in a rare Pite full-length production.

Górecki’s music is often associated with the Holocaust and explores themes about motherhood and the separation of families. Pite gives these themes new meaning in a work that moves from the big picture of displaced communities to focus on the emotions of individuals. The large ensemble cast moves as one body, packed together in tight rows, until one distraught couple is marked out from the crowd through a poignant pas de deux.

The New York Times has described Crystal Pite as “one of the most talented and intriguing choreographers working today” – and she is undoubtedly among the world’s most sought-after. Pite shares that pedestal with Forsythe, Kylián and Mats Ek and has created choreography for the major ballet houses around the world. As a dancer, she performed with the Ballet British Columbia and William Forsythe’s Frankfurt Ballet before debuting as a choreographer in 1990. In 2002, she established her own company, Kidd Pivot, which tours around the world with genre-transcending and original works in which movement, music, text and visual design are key elements of the performance.