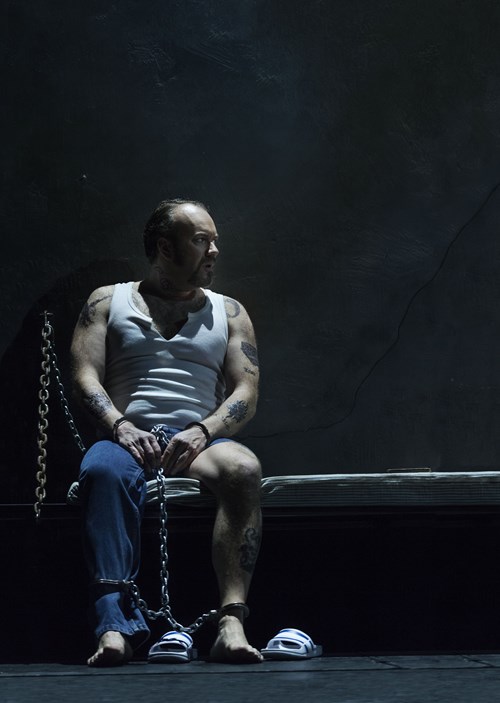 All performances of Dean Man Walking is unfortunately cancelled due to the ongoing strike in the cultural sector. Ticket holders will be contacted for refunds.
Buy

A blockbuster success about the death penalty and forgiveness

Dead Man Walking is about a close friendship that develops between a nun and a convicted killer on death row. The story originates from the Oscar-winning film of the same name and is based on the personal experiences of Sister Helen. The opera has enjoyed success around the world – and is now finally coming to Norway!

We find ourselves in Louisiana in the 1980s. Two teenagers are brutally assaulted. The boy is killed by a shot to the back of the head and the girl is raped before being stabbed to death.

A few years later, Sister Helen is contacted by Joseph De Rocher, an inmate at a maximum-security prison in the U.S. who has been sentenced to death for the murders of the two teenagers, but claims he is innocent and asks the nun to act as his adviser. Sister Helen and the inmate develop a strong friendship, but she meets with considerable opposition – from her colleagues, the prison priest and the parents of the murdered teenagers. How can she possibly interact with such a cruel killer?

A nun’s battle against the death penalty

The opera is based on the book Dead Man Walking, written by the American nun Helen Prejean. It deals with her work among death-row inmates and her battle against the death penalty in the United States. The book was made into a movie in 1995, starring Susan Sarandon and Sean Penn.

The music is grandiose, melodic and almost cinematic. It supports the intense human drama that is at the heart of the opera, featuring elements of American song traditions like gospel, jazz and spirituals.

Age recommendation: The opera opens with a powerful scene depicting sexual violence. It is therefore not recommended for children under the age of 16 years.

Two teenagers are attacked by two men in a wood. The boy is shot in the head and the girl is raped before she is brutally stabbed to death.

The nun Sister Helen tells her colleague, Sister Rose, that she is going to visit Joseph De Rocher, a prisoner on Death Row, convicted of murdering the two teenagers. Sister Rose tries to talk Sister Helen out of going, but to no avail.

At the prison, Father Grenville tries to dissuade her from meeting Joseph, but she insists that it is her duty to be there for him. The warden warns her that as Joseph’s spiritual advisor, she will be expected to be present at his execution.

At their first meeting, Joseph insists on his innocence and asks Sister Helen

to accompany his mother to a meeting with the pardon board. After the meeting, the parents of the murdered teenagers angrily confront Sister Helen for helping the murderer and not them.

Joseph reacts angrily when hearing that his appeal has been denied and Sister Helen once again tries to convince him to confess. As she leaves him in his cell, she starts hallucinating from dehydration.

A prison guard informs Joseph that his execution is set for August 4.

Sister Helen wakes from a nightmare and Sister Rose tries to persuade her to stop seeing Joseph. When Sister Helen refuses, they pray for the strength to forgive him.

On the day of execution, Joseph still refuses to confess and be at peace with his deeds, before saying goodbye to his mother and younger brothers.

Sister Helen meets the families of the teenagers, who are angry that Joseph still refuses to confess. Owen Hart, the father of the murdered girl, however, admits to Sister Helen that he is no longer sure that their anger is doing them any good.

Asked if he has any final words, Joseph asks the parents of the teenagers for their forgiveness.

Interview with the director

Making a man out of a murderer

A conversation with director Orpha Phelan about her work with Jake Heggie's Dead Man Walking.

What were your first thoughts upon starting your work with Jake Heggie’s modern classic Dead Man Walking?

I was bowled over by the unashamed directness of the music, which cut straight to my heart. It was exciting to imagine most of the audience engaging in the same way and being gripped immediately.

But perhaps I was struck most by seeing the story from several different perspectives: We meet the victims. We witness their families’ grief. We meet a mother whose son will be executed. We follow Sister Helen as she fights for a murderer’s life yet struggles to forgive him. Moreover, some of us may possibly fall a little in love with the murderer himself. Being asked to direct a piece like this is a real gift.

How do you prepare for the task of telling a story like this? It is after all not fiction, but based on a very real situation in the memoirs of the real-life Sister Helen and her work with an actual inmate on Death Row – something quite different from for example La bohème or The Tales of Hoffmann, which you have also worked with in recent years.

In some ways, I feel that I’ve been preparing for Dead Man Walking my whole life. I was brought up in Catholic Ireland and so I was immediately able to grasp all of the religious references. So it was natural for me to find myself enlisting the help of Father Robert, a local priest where I now live in London, who is also the chaplain at Wormwood Scrubs Prison – one of the tougher prisons in London. He kindly offered to take my designer, Nicky Shaw, and me on a tour of the prison and this was really where our journey began.

The first thing that struck me was a sign posted up in the prison grounds: Beware - Feral Cats. Apparently, the cats were keeping the rat infestation at bay - helped, I was told, by the resident cannibal who lured the rats into his cell and ate them alive. This was certainly an awakening for me!

Many things will remain with me from that trip where we walked for miles through endless corridors, interrupted only by locked doors. But the thing that struck me most was not the bright lights or the rancid smells, but the only very occasional sense of hope in the midst of the institutionalization and despair.

I have always thought it wrong to kill another human being, for any reason. Before starting work on Dead Man Walking, in my naivety, I thought that most people felt the same way as me. In my research, however, I have come across many articulate and persuasive people – some relations of victims, some in law reinforcement, some God-fearing Christians, some ‘normal’ citizens – who believe in an eye for an eye. The death penalty is imposed in 31 states in the USA – of which, however, four have it up for review by demand from their governors – 2905 people were on Death Row as of the last statistic from 2016, and 385 have been executed in the past ten years. So yes, many people feel very differently indeed.

Given the experiences you have had first in preparing for this opera and while working on the actual staging of it, what would you like the audience to experience and take with them from their meeting with Dead Man Walking?

Perhaps one of the most interesting journeys we go on during Dead Man Walking is our own: As we come to empathize with the families of the victims, I wonder how many in the audience feel differently towards Joseph when he admits his guilt. Is our opinion of the death penalty, which we imagine to be unshakable, consistent to the very end? I can say that I have personally struggled with my ideals.

Prisons institutionalize and dehumanize; it is easier to kill people who we think of as non-humans. I think that the opera restores humanity to a section of society, which has had its humanity torn away. We are all forced to address the question: Is it ever right to kill another human being?

If we leave, engaged with that question, that can only be a good thing.