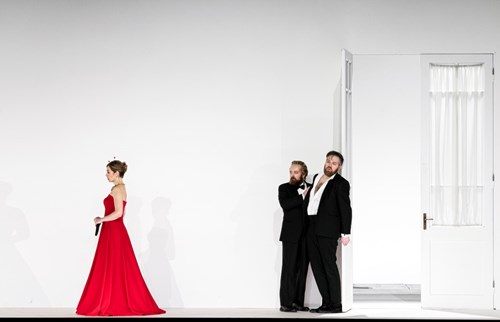 Eugene Onegin is an intimate encounter with youthful infatuation. It is also a powerful story about something familiar to us all: the passing of time, the chances we didn’t take – and that deep down, we are all alone.
Buy

The opera could have just as aptly been called Tatjana Larin. After all, it is as much her story as it is anyone else’s. It is about when she sees him for the first time – the handsome, well-travelled and self-confident Onegin. And it is about when, 16 years later, he sees Tatjana – a modern, well-read and beautiful woman. But by then it’s too late.

It’s a bitter cold winter. We’re at the Larin Family estate outside of St. Petersburg, where Mrs Larin lives with her daughters, Olga and Tatjana. When Olga’s fiancée Lensky introduces Tatjana to his friend Onegin, the lives of the four youths change forever.

Eugene Onegin features oversized choir scenes and oversized music. Yet it is also an intimate work that takes us into the remote corners of the human mind – inspired by Alexander Pushkin’s novel. Tchaikovsky referred to the opera as ‘lyrical scenes’ and could not imagine it being performed on major opera stages. He was wrong. Since premiering at the Bolshoi Theatre in Moscow in 1881, it has become a well-established opera in opera houses around the world.

The opera delighted both audiences and critics when it premiered here in 2020. Now, as then, Svetlana Aksenova is performing the role of Tatjana, and Opera Director Randi Stene is starred as Larina, while Iiuri Samolov is singing the role of Onegin.

Director Christof Loy is known for his strong directing skills and has been nominated ‘Opera Director of the Year’ by trade magazine Opernwelt no fewer than three times. The magazine also described his Eugen Onegin in Oslo as one of the best opera performances of 2020.

... the most beautiful and passionate music ever to have risen from the Norwegian National Opera’s orchestra pit.

... an intensely tantalising production performed between white walls – not in the pacifying plush of the Czarist days, but so ‘naked’ that it invigorates or softens our hearts and everything in them for a few hours.