A kiss for
all the World 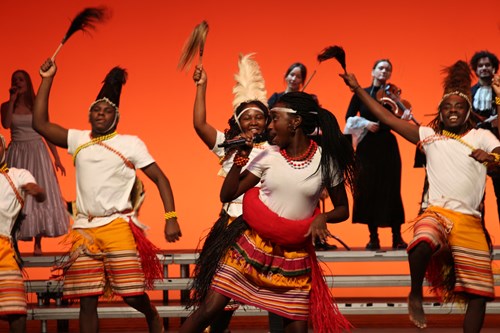 Because of the infection control rules, we have to postpone this concert to 4 December 2022. If you have bought tickets, they will be valid for the new date. If you want your payment refunded, we ask you kindly to contact us at publikum@operaen.no within 4th of February. We apologise for the inconvenience and ask for understanding that this will take some time.
Buy

The Norwegian Chamber Orchestra is joining up with Fargespill, an ensemble of children and young people, to perform a brand-new version of the famously popular Ode to Joy.

One string quartet, one popular symphony and an on-stage ensemble consisting of 90 children and young people with roots from around the world. Beethoven’s Ninth Symphony like you’ve never heard or seen it before!

With respectful curiosity, Fargespill has danced and sung its way through Beethovens jubilant Ode to Joy, picked it apart and put it back together again with elements ranging from rap and afrobeat to the music of a Turkish diva!

Beethoven’s Ninth Symphony is one of the most familiar classical pieces of all times. Since its premiere performance over 200 years ago, the piece has been performed during special occasions and has become a symbol of the ‘Western values’ of freedom, peace and solidarity. Ode to Joy has been adopted as ‘Europe’s national anthem’.

A kiss for all the World is a story about today’s Europe that can only be told by the very young people who are standing on stage. After all, Fargespill is not only a stage ensemble, but the name of a method for how we people engage in dialogue with one another. Their performances are based on the cultural heritage of the performers themselves. When Fargespill engages in dialogue with DNK, we encounter Beethoven through a kaleidoscope, a kiss for the entire world that binds together the past, present and future.

Fargespill is a stage ensemble and artistic organisation that primarily performs with children and young people of different backgrounds. With the support of a professional organisation, the Fargespill performers stage performances of high artistic quality that express the way forward for a society of diversity.

Fargespill debuted during the Bergen International Festival in 2004. Since then, thousands of Fargespill members have performed at major public events that include the Nobel Peace Prize Award Ceremony and European Road Cycling Championships. The majority of Norwegian ministers and European royalty – totalling 500,000 viewers across the country – have experienced Fargespill. The ensemble has released two albums and a book, won various awards and been nominated for the Spellemannprisen (Norwegian Grammy Award) and Nobel Peace Prize.

Fargespill helps communicate values and narratives that bind us together and that make people feel like part of a greater ‘we’.

About the Norwegian Chamber Orchestra:

The Norwegian Chamber Orchestra is one of the world’s leading chamber ensembles, famous for its creative programmes, virtuosity and pioneering performances. Since its establishment in 1977, the orchestra has recorded around 20 albums and toured around the world. Boasting six Spellemannpris awards, including the ‘Spellemann of the Year’ award in 1988, the orchestra is one of the most award-winning performing artists of any genre.