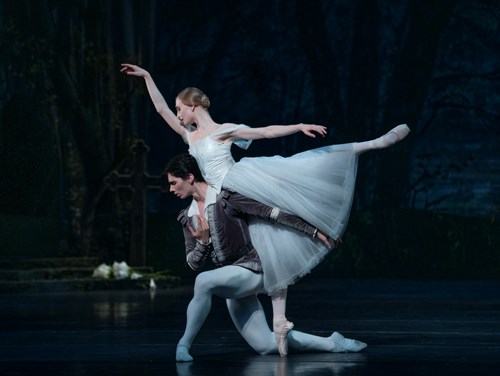 With scenes so beautiful they take your breath away and love so strong it conquers death. You won’t want to miss this gripping ballet with the Norwegian National Ballet!
Buy

First love, betrayal, grief and forgiveness – Giselle is a rollercoaster of a romance. “Everlasting beauty on the Main Stage,” wrote Aftenposten in 2020.

Giselle falls in love with Albrecht, who hides the fact that he is actually engaged to Bathilde. Giselle loves Albrecht so intensely that she dies of madness on discovering his betrayal. Albrecht repents and visits Giselle’s grave, where he is haunted by the Wilis – vengeful ghosts of jilted brides who drive young men to dance to death. Is Giselle’s love strong enough to save him?

Romantic ballet as a genre arose in the 1800s, with a rural first act, followed by a ‘white’ second act. During the white act, the female dancers wear only white costumes and the act usually includes supernatural elements and insanity.

Giselle is the quintessential romantic ballet. We experience not only a madness scene that requires considerable dramatic skills on the part of the ballerina, but also the supernatural Wilis in the second act.

“Giselle is the dream role for a ballerina. Exposing the soul and spirit is no easy task. As the wind, she never stops moving,” says former prima ballerina Cynthia Harvey, who has staged Giselle for the Norwegian National Ballet.

After the premiere in Paris in 1841, all major ballet companies have created their own version of Giselle. Harvey based hers on the original choreography by Jean Coralli and Jules Perrot to Adolphe Adam’s evocative music.