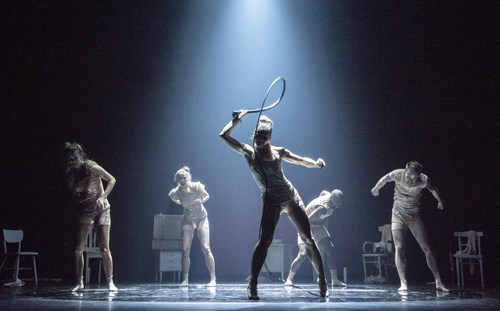 A reunion with three of Strømgren’s best works!

The Jo Strømgren Kompani is serving a three-course meal with energetic and distinctly different choreographies – made in Oslo.
Buy

The award-winning Kvart takes place on a square woollen blanket and explores a type of dance not often shown on stage, namely dancers dancing for each other.

Against a backdrop of crackling French music from the 1930s, Strømgren invites us to play along in The Ring – perhaps the world’s oldest symbol.

With a sense of wonderment, Gone explores the relationship between sadness and nostalgia, about where the one ends and the other begins and about the aggression and denial experienced along the way.

Created for the popular dance company

These works were originally created for the Oslo Dance Ensemble (ODE), one of the most popular dance companies in Norway for over three decades. Jo Strømgren was the choreographer with whom they worked most. Throughout the lifespan of the company, from 1994 to 2018, Strømgren created no fewer than eight works for them. ODE had never before danced beyond the country borders, but with Made in Oslo, these three works are meeting the world on an international tour. After having performed in Lithuania and Spain, the production is returning to the city where the works took shape – and to the Oslo Opera House.

Jo Strømgren has distinguished himself both nationally and internationally as a choreographer, director, set designer, playwright and former dancer. Since 2013, he has been associated with the Norwegian National Ballet as the choreographer in residence, while at the same time working with his own company, the Jo Strømgren Kompani (JSK).

JSK has toured in over 60 countries with its uniquely characteristic combination of dance and theatre, combining distinct and often highly physical humour with darker, political undertones.