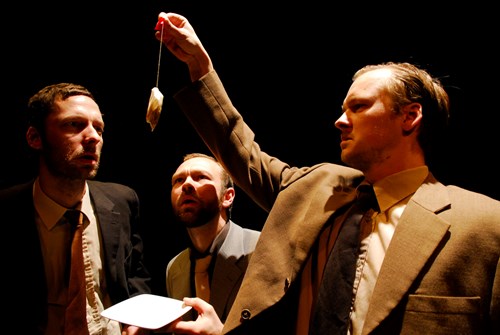 Theater performance about a coffee ritual with complications

A society of sworn coffee drinkers in Europe gather for their daily ritual. But harmony is broken by the discovery of a used teabag, probably Asian. How far are they willing to go in order to track the unpatriotic traitor down and bring this evil act to justice?

The isolated conflict between drinkers of coffee and tea in a micro world is of course open for interpretation by audiences. JSK always tries to mirror the macro world by scrutinizing basic elements of contemporary phenomena. In our turbulent times the average citizen is, for example, ever more tempted to accept torture, the surpression of minorities, and other violent means in order to restore order and avoid a clash of civilizations.

These are potentially difficult themes, not only to discuss, but particularly to reflect in theatre. Much respect, cultural knowledge, and political insight is needed to provide credible standpoints in a international conflicts. But then again, one is also free to harass the seeds of such problems that are to be found universally.

The Society had its premiere 15 years ago in 2008 in Beirut, and has since been performed with great success and received rave reviews in, among other places, the USA, Canada, Norway, Sweden and Australia.

The Society expertly straddling the fragile line between humor and horror.