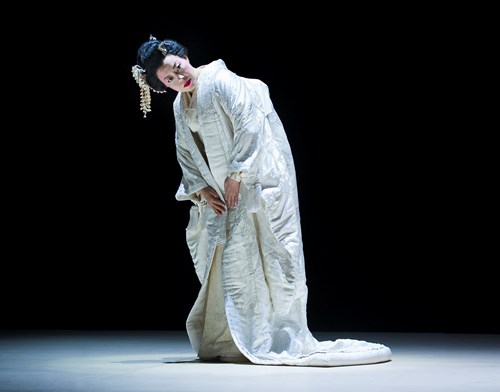 A young Japanese girl meets an American naval officer, she with a dream of American freedom and he with a longing for the exotic East. But is it really love or the perfect example of the attraction of opposites? Madama Butterfly is a story about culture clash and crushed dreams set to Puccini’s exquisite music.

In the most famous aria, ‘Un bel di’, Madama Butterfly – or Cio-Cio San as she is called – sings about ‘one fine day’ – the day when the American officer Pinkerton will return to Nagasaki for her and their son. To him, his marriage to the Japanese geisha is for fun, while she takes it very seriously.

Everyone around Cio-Cio San realises that her dream will never come true. All the same, no one can take from her the intense hope that a miracle might happen. But when Pinkerton returns three years later with his American wife, the encounter is a rude awakening.

When working on the opera, composer Puccini studied Japanese music and culture in order to create an authentic reflection of a country he had never visited. Yet Madama Butterfly is a distinctly Italian opera with long lines and beautiful melodies. According to Puccini himself, it was the most emotional opera he had ever written.

It premiered at La Scala in Milan in 1904 and the composer described its reception as a ‘pure lynching’. Today, Madama Butterfly is one of the world’s most widely produced operas. 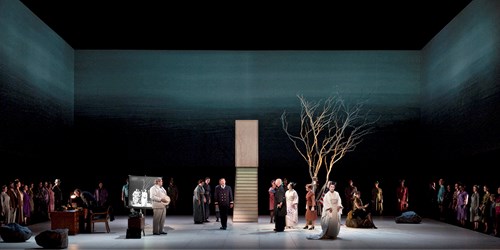 Our production of Madama Butterfly is one of the most frequent opera performances in Bjørvika. It tells the story of a young Japanese girl through the main character’s adult son, as he looks back on his parents’ story.  The action takes place in Japan immediately after World War II at a time when American soldiers occupied the country and mass prostitution was a growing problem.

This season, Norwegian soprano Elisabeth Teige will be singing the title role. Since her debut as Senta in The Flying Dutchman with the Norwegian National Opera & Ballet in 2015, Teige has enjoyed success on various European opera stages as Irena in Wagner’s Rienzi with the Deutsche Oper Berlin, Floria Tosca and Cio-Cio San with the Mannheim National Theatre.

Behind the scenes with Elisabeth Teige

For Elisabeth Teige Madama Butterfly is amongst the most beautyful operas. This time it is different for her to sing Cio-Cio-San.

F B Pinkerton, a young American naval officer, has recently arrived in Japan. He has bought a house, a wife and servants from a Japanese businessman called Goro. The house purchase contract is for 999 years but can be abandoned at any moment. The marriage contract is similarly loose.

Goro runs through the order of the ceremony – which will be minimal - and lists who will be there: officials, family; a total of about two dozen.

The American Consul, Sharpless arrives. He is there both in his official capacity for the formalities and as a friend of Pinkerton’s family. Sharpless councils Pinkerton to be careful not to hurt the Japanese girl. Stop fussing, says Pinkerton, and raises a glass to when he eventually marries an American girl in a real wedding.

Goro rushes in and tells them the bride and her friends are coming. Pinkerton and Butterfly exchange stilted formalities. Butterfly is at pains to relate how she is from a family that used to be wealthy, but whom disaster reduced to poverty - the women in her family forced to work as Geishas. She says she is fifteen.

Soon the rest of the family and the Registar arrive.

Away from the celebrations Butterfly shows Pinkerton the few things she would like to keep with her in her new life: they include the sword with which her father committed suicide, and Otake, sacred representations of her ancestors. Butterfly reveals that she has secretly been to the Christian mission, that she wishes to desert Shintoism and follow Pinkerton’s God – and to prove it she throws away the Otake.

The wedding ceremony itself is rapid, and once the papers are signed Sharpless and the Registar leave. Pinkerton wants to get rid of the guests too, and as fast as possible, but his efforts are thwarted by the arrival of another Uncle, the Bonzo, a Shinto priest. He knows that Butterfly has been to the Christian mission and furiously accuses her of abomination. He and her whole family curse Butterfly and leave.

Alone for the first time together, Pinkerton comforts Butterfly who is shaken by the violent turn of events at the wedding. Under a beautiful night sky, they manage to laugh about the chaos of their wedding and become increasingly lost in their passionate exchanges.

Pinkerton has left for America, promising that he will return when the robins next build their nests. But 3 years have passed and Butterfly and Suzuki are running out of money. The Consul has continued to pay the rent, but there is no word from Pinkerton. Butterfly watches every US ship that arrives in the port in case it is his.

Suzuki, the maid, fears the worst and points out that it has never been known for one of these foreign husbands to return, but Butterfly insists that he will return if she keeps the faith.

Goro arrives with Sharpless, who has a letter from Pinkerton asking him to prepare Butterfly for the bad news. But his attempts to read the letter are interrupted at first by an over-excited Butterfly – who misinterprets the letter as good news – and then by the arrival of Yamadori a wealthy man who is offering to marry her. Deserted women are accepted as divorced, explains Goro. Not in her country, America, says Butterfly. She rejects Yamadori.

Sharpless decides to speak directly rather than read Pinkerton’s letter. What would she do if Pinkerton never came back? He advises her to accept the marriage offer from Yamadori. Butterfly runs from the room and returns with her baby. It is Pinkerton’s, born after he left, and about which he knows nothing. He might forget her, says Butterfly, but he will return for his son. Sharpless promises to tell Pinkerton about the child.
The canon sounds from the port announcing the arrival of a ship. It is Pinkerton’s. Butterfly and Suzuki prepare to welcome him back: they decorate the house with flowers and lanterns, and Butterfly dresses as she was on her wedding day. Night falls and still, he doesn’t arrive. Butterfly remains awake all night. By the morning she is exhausted, and Suzuki tells her to sleep, that she will wake her when he arrives.

While she sleeps, Sharpless arrives with Pinkerton. They have come early so that they can ask Suzuki to help tell Butterfly the truth. Suzuki sees a woman with them and asks who it is. It is Pinkerton’s wife, Kate. Sharples asks Suzuki to talk with Kate, explaining that she is a kind person who will look after the child properly. Suzuki is astounded that they would ask a mother to give up her child but agrees to the conversation.
Pinkerton is filled with remorse. He doesn’t have the courage to stay and face Butterfly, preferring to leave it to Sharpless and Kate. He asks Sharpless to give her some money and rushes away.

Butterfly wakes. She is frightened to see Sharpless and not Pinkerton, and demands to know if he lives, if he will return. Suzuki tells her truth. Butterfly sees Kate and understands quickly that this is his new wife. Kate asks her to give up the child. Butterfly says that she will give the child only to Pinkerton himself. Tell him to return in half an hour, she says, and he can take the child. Sharpless and Kate leave.

Alone, Butterfly prepares to end her life. She looks her child in the eyes for the last time hoping that somehow he will always remember her, then blindfolds him, and kills herself with the same sword her father had used.
When Pinkerton returns for the child she is already dead.