… and Brahms + She was black 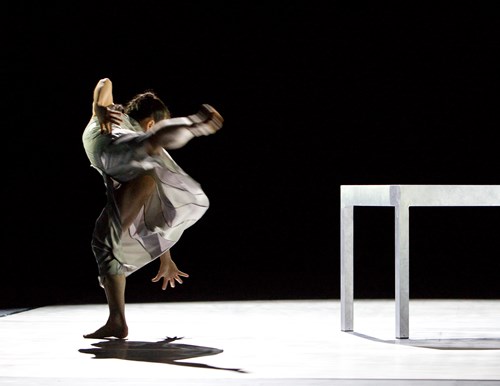 Mats Ek is back!

Mats Ek has more than anyone put the Nordic countries squarely on the international dance map. He is now working together with the Norwegian National Ballet once again, 20 years after their last collaboration.
Buy

Swedish Mats Ek has been creating his own unique dance language since the 1970s. His style is uniquely Nordic, yet absolutely universal and embraced all over the world.

Ek is a master storyteller – in highly precise and clean-cut dance packed with emotion, though also often humour. All the same, Ek’s choreography is based on classical ballet and the dancers must be trained in classical ballet.

The Norwegian National Ballet is now performing the dazzlingly colourful ...and Brahms, as well as the ballet She was black, described as “an expressive explosion of movement and feeling”.

Mats Ek is famous for creating modern versions of the most famous classical ballets.

He has an unusual movement style, which combines a rooted, earthly quality with physical humor and balletic precision and stretch [and an] interest in social and psychological themes.

The last time Ek worked with the Norwegian National Ballet was on the successful Sleeping Beauty in 2001, which was revived in 2003 and 2006.

In the past, the Norwegian National Ballet has danced Ek’s Soweto (1981) about the horrors of the apartheid regime and Bernarda’s house (1986), both of which were critically acclaimed successes.

Mats Ek and the dancers of the Norwegian National Ballet have now further developed the ballet ... and Brahms, featuring imaginative, colourful costumes with a playful reference to the classical tutu.

… and Brahms is danced to Brahms’ dramatic and sweeping Violin Concerto in D major, with the Norwegian National Opera Orchestra’s concertmaster Guro Kleven Hagen as soloist.

A ballet that takes chances, stretches and balances on the very edge of what the body can do

An explosion of dance

Audiences can also experience She was black.

I dreamed about God last night.
“What did he look like?”
“She was black!”

She was black was inspired by this dialogue from a Swedish revue. In the spirit of interpersonal relationships, the ballet shows some of the comical and intimate, yet dark situations that can arise in the field of tension between the private and the social.

We also encounter a creature scrambling around and stumbled over, but never seen – until ‘She’ ultimately spreads her wings and reveals the potential of the unseen.

The music is “dark, energetic, raw and poetic” according to Ek, who choreographed She was black to Henryk Góreckí’s ‘Quasi una fantasia’, String Quarter No. 2.

Ana Laguna – one of the greatest dance artists of our time – has come to Oslo to stage the performance together with Ek.