Orpheus
in the
Underworld 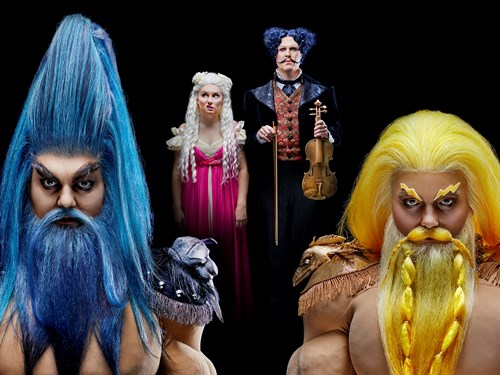 This is exactly what is needed right now: a wacky world of gods where the party never ends and everyone dances the can-can!
At any rate, that is what Eurydice longs for. She is tired of the tedious Orpheus and being at his beck and call for what seems like an eternity. The time has come to say no, to laugh and to enjoy an operetta!

What is an operetta?

Opera – there are those who believe that opera is stuffy and serious, with nothing but love and death, grief and sorry and very little laughter. Well, for those who think this – think again. Meet opera’s little sister: operetta!
Operettas poke fun at opera, at we humans, at gods and at everything serious. And in Orpheus in the Underworld, we poke fun in Norwegian – in a completely new reinterpretation of the classic myth.

There are several operas about Orpheus, who he loses his wife, but sings so beautifully that he is allowed to descend into Hades, the kingdom of the dead, to rescue her.
But what if Orpheus is actually happy to be rid of Eurydice? And what if she does not actually want to be rescued?

Offenbach’s operetta presents such an alternative version. It toys with the myth, with upper-class taste and with power-hungry authorities. In Paris in 1858, some found this offensive, while others considered it to be liberating and exciting. Both die-hard fans and the offended had plenty of opinions on Orpheus in the Underworld. However, all of them were already incorporated into the performance as ‘public opinion’.

In our production, this role is ‘ordinary folk’ and ordinary folk have opinions on just about everything: on opera, on the story and on how it should end. But the ending will not be revealed here because ordinary folk do not like spoilers.

Vidar Magnussen debuts at the Oslo Opera House
Actor, comedian, scriptwriter and director Vidar Magnussen is best known from the TV series Magnus, Snøfall and Side om side. He won the Hedda Award for ‘best actor’ for his role as the master of ceremonies in Shockheaded Peter at the Norwegian Theatre and the Komiprisen award for ‘newcomer/breakthrough of the year’ for his performance in Mascarade at Den Nationale Scene. He directed the successful The Book of Mormon and Charlie and the Chocolate Factory at the Norwegian Theatre and is now debuting as a director at the Oslo Opera House.