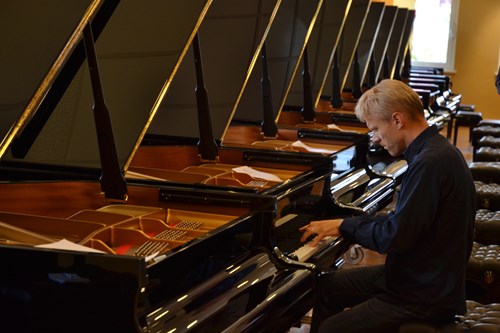 For several decades, Håvard Gimse has been one of the rare poets at the piano. When he performs Chopin on the Main Stage, every note is packed with emotion.
Buy

The last time Gimse took the stage at the Oslo Opera House, it was to perform his Rakhmaninov interpretation during the ballet Anna Karenina. This time, he is performing a solo concert with a rich repertoire of Chopin’s piano pieces.

“No one can sing on the piano like Chopin,” says Gimse.

Even 170 years after the composer’s death, Chopin’s unpredictable, emotional and technically demanding piano pieces make us feel as if we never really know what to expect. “To an accomplished virtuoso all tricks are permitted,” said Chopin – thereby giving Gimse free rein.

Most musicians are a little scared of the etudes, musical pieces originally intended as practice for specific challenges. This was before Chopin turned this demanding form of exercise into an art.

The three etudes that Gimse will be performing during this concert are great examples of Chopin’s lyric poetry and sensitivity – as well as the composer’s revolutionary desire to continuously create something new.

In the Aeolian Harp Etude, Op. 25/1, fingers skim over the keys as lightly as on a harp, and in the etude known as ‘The Bees’, Op. 25/2, the notes fly at a swift, technical speed from flower to flower – while all the while Gimse must keep the elegance and ease intact.

When the news arrived that Poland had fallen during the insurrection against Russia in 1831, Chopin wrote the Revolutionary Etude. It opens with the sound of a shot – and what may very well be a Polish hero fighting against his Russian superiors.

The programme also includes such popular Chopin classics as his last major work Polonaise-Fantaisie. His emotional lullaby, Berceuse Op. 57, can also be expected towards the end of this full-length programme.

Gimse will also be performing the famous Minute Waltz, said to be inspired by a dog chasing its own tail. It is proven to be virtually impossible to complete the waltz within one minute, but it is definitely played at astonishing speed.