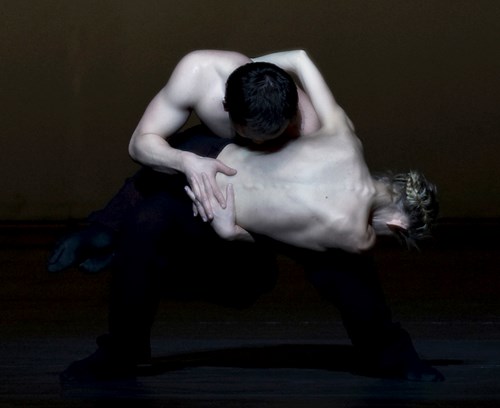 One new and two legendary works in a single performance

Rising star Emma Portner is behind this evening’s newly created work, which shares the stage with famous works by Kylián and Balanchine.
Buy

“More Emma Portner, please!” wrote the international press after seeing the duet islands, created by the Norwegian National Ballet. In 2021, Europe had the opportunity to see exactly how unique Portner is when she and islands were invited to join a celebrated group of choreographers during the touring production of Dialogues. She has now created a completely new work for the Norwegian National Ballet.

Canadian Portner has become a phenomenon and has created dance works for everything and eeryone from Netflix, Apple and the Guggenheim Museum to Justin Bieber, Banks and Blood Orange. Now that she is returning to the Oslo Opera House, we can finally enter her incomparable dance universe once more.

‘Islands’ is nothing short of a sensational introduction to Portner’s language of movement... More Emma Portner, please!

Jiří Kylián’s masterpieces continue to inspire new generations of dancers and combine modernity with technique and beauty. When the Norwegian National Ballet takes to the stage with 27’52’’, one of his most characteristic works will be performed by dancers who know their Kylián, thanks to several decades of collaboration with the choreographer who has rejuvenated ballet as an art form.

The duration of the work is exactly as the title implies and deals with the very same – time – a unit that, according to Kylián, “controls our lives without us even knowing how to define it”.

Playful and Balanchinian to Mozart

Mozart’s music has been praised as music embodied through dance. George Balanchine also believed this and was of the opinion that Mozart’s Divertimento No. 15 is among the best ever written in its genre. Balanchine’s danceable interpretation of the musical piece has been called an indisputable masterpiece.  He himself was a skilled pianist and he literally created the choreography from the rhythms, phrasing and colours in Mozart’s musical score.

“See the music, hear the dance,” said Balanchine said – and when the National Ballet now performs the lively Divertimento No. 15 for the very first time, the Norwegian National Opera Orchestra will be combining the music and movements of the dancers into a neoclassical ode to ballet.