The barber
of Seville 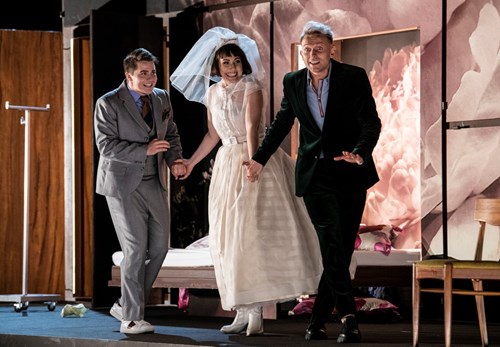 A vitamin boost of an opera

Rossini’s masterpiece is bursting with exuberant music, captivating comedy and ingenious disguises. This performance is ever so ready to enchant you!
Buy

The young girl Rosina lives in the home of the old doctor Bartolo, who dreams of marrying her. But Count Almaviva has fallen head over heels in love with the girl and tries to win her heart.

The city’s self-proclaimed handyman, the barber Figaro, comes to the count’s rescue. This sets the stage for bribes, betrayal and comic complications. How does Figaro plan to unravel all the knots to save the day – and love?

The characters all have their unpleasant sides, from selfishness and desire to greed. Director Jetske Mijnssen takes this seriously and shows how comedy is never far from tragedy.

The Barber of Seville is one of three plays by Pierre Beaumarchais and is a prequel to the Marriage of Figaro. In that play, Count Almaviva has won his Rosina, but it is not a happy marriage. Knowing this gives a different tone to Rossini’s comic opera about the young love between Rosina and Count Almaviva.

Gioachino Rossini left behind an impressive 39 operas when he died in 1868. The Barber of Seville is his best known and most frequently performed opera.

In France, Rossini was nicknamed ‘Monsieur Crescendo’ because his music increases gradually in intensity. It is said that several women had to be carried out of opera houses after fainting due to the intense power of Rossini’s music.

So, make your way to the Oslo Opera House and get ready for a classic feel-good opera of the highest calibre!

The production makes this evergreen repertoire interesting in a way I never thought possible.