The Master-
singers of
Nuremberg 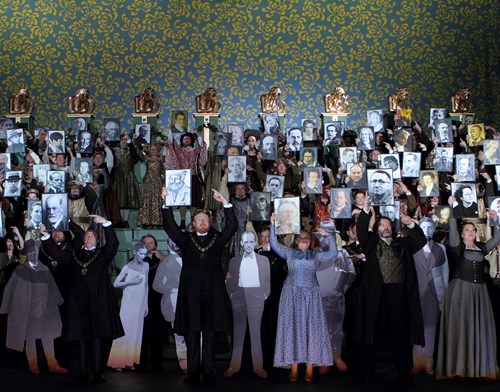 The performances are cancelled as a measure made to help prevent the spreading of the coronavirus in Norway.

Tickets paid by card will automatically be refunded via bank. If tickets were paid by cash or gift voucher, we will be in touch with you over the next few days.

We are truly sorry for the inconvenience. Should you have any questions, please don't hesitate to contact us at the following e-mail: post@operaen.no. Due to many inquiries, please bear over with us for any delay.

After falling in love with Eva, Walther finds out that she has been promised to the winner of the master singers’ song contest. Walther is determined to win, but must first be accepted into the guild. He sings beautifully, but violates all the rules of the master singers and is refused membership. This leads Walther to scorn the old-fashioned group, particularly the nit-picky judge Sixtus Beckmesser, who is personally bent on winning Eva’s hand. An older master singer, Hans Sachs, helps Walther write a new song, which is performed with more feeling than ever before heard ...

Unlike many of Wagner’s other operas, The Master Singers of Nuremberg is not about gods or sorceresses, but everyday people. It is often described as Wagner’s only comical opera. But even though the opera is lighthearted, clever and optimistic, there is an underlying sense of seriousness and melancholy.

Successful production to be performed in Oslo

Director Richard Jones succeeds in bringing out the humorous and surrealistic aspects of the piece, while at the same time portraying the various characters in Nuremberg with warmth and understanding. The production has enjoyed resounding success in several British opera houses. The Telegraph has called it “A total triumph”, while The Guardian acclaimed it for its “sharp focus, humour and inspiration”.

The Master Singers of Nuremberg deals with a theme that is popular with Wagner: What does it mean to be a member of society or a nation? What about those who do not fit in? Should they be forced to be like us or should we tolerate the fact that they are different? In this sense, Wagner’s opera from 1868 – with a story that takes place in the 1500s – poses questions that are highly relevant today.

The Master Singers of Nuremberg is also an opera that celebrates the important role of art, especially music, in society. It ends in a tribute to German culture, which has contributed to giving it a complicated history, from the premiere performance to this very day. It was, for instance, Hitler’s favourite opera. But, at the same time, The Master Singers of Nuremberg is about reconciliation and about the relationship between tradition (represented by the master singers) and innovation (represented by Walther’s new song and style). Wagner’s masterpiece points out that we are standing on the shoulders of giants while reaching out to the future.

Production from the English National Opera