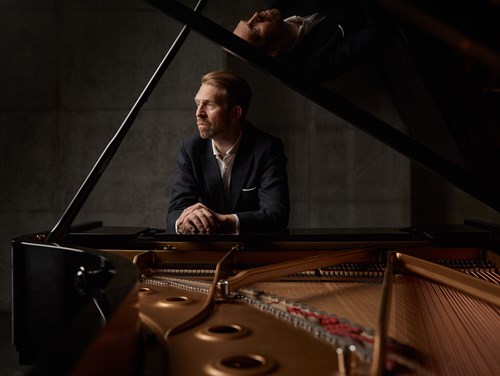 Leif Ove Andsnes has enchanted audiences with his musical elegance and amazing virtuosity for over 30 years. Czech melancholy and Beethoven’s second-to-last sonata are on the programme when he returns to the Main Stage.
Buy

The music of Janáček and Dvořák has followed Leif Ove Andsnes throughout his life after having studied with the Czech piano pedagogue Jiří Hlinka in Bergen. In addition to the star pianist’s Czech favourites, he will also be performing works by Ludwig van Beethoven and Alexander Vustin.

Leoš Janáček was a passionate patriot. Sonata no. 1, also known as ‘From the Street’, was written in response to the murder by bayonet of a carpenter in broad daylight by Austrian soldiers.

The sonata originally had three movements, but riddled with doubt regarding the quality of the piece, Janáček tore out the third movement and burned it. After the premiere in 1906, he threw the entire work in the Vltava River. Regretting this immediately afterward, he described the sight of the music sheets floating down the river as reminiscent of swans.

Fortunately, the first pianist to perform the work was familiar with Janáček’s temperament and had secretly made two copies of the first movements. It was not until Janáček’s 70th birthday that she dared tell him about this and he consented to the publishing of the sonata as a two-movement work.

Antonin Dvořák’s piano works are often overshadowed by his symphonies and chamber music. The spring of 1889 marked a turning point when he composed the large-scale piano cycle Poetic Tone Pictures. In it he explores a more poetic and descriptive tonal language, which he gradually also carries over to his symphonic works.

A deaf Beethoven, alone at Christmas in 1821 and in despair on finding it easier to hear the tones in his imagination than on the piano, formed the backdrop for the composer’s second-to-last piano sonata.

The condensed sonata he wrote during that time in his life, Op. 110, is as disturbing as it is genius. It reveals an artist impatiently drifting from idea to idea, with a simple and rhapsodic first movement – followed by a second movement full of explosivity and rhythmic elements.

But it is the third movement that is the heart of the work. It throbs with a life lived: from a dark and personal lament to a spiritual fugue inspired by the St. John Passion by J.S. Bach.