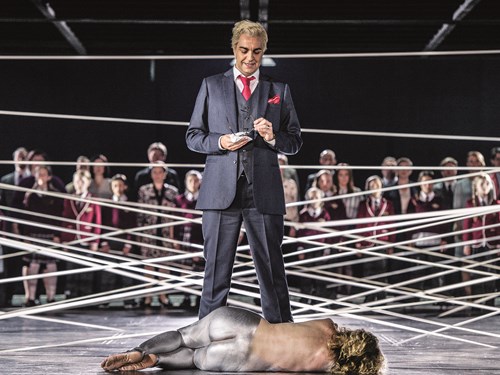 Powerful opera about the freedom of art

Political unrest, torture and ruthless power play. Art is gagged – as is love. This is the brutal world we encounter in Puccini’s dramatic opera Tosca.
Buy

Scarpia’s dark disharmony stands in stark contrast to the beautiful arias and duets of the pair of lovers, such as Cavaradossi’s famous romantic aria ‘E lucevan le stelle’ and Tosca’s life creed ‘Vissi d’art’: I lived for art.

Director Calixto Bieito portrays the intense and intimate interaction between these three characters, in addition to the brutal reality that the opera actually depicts, namely the freedom of art in a world that demands usefulness and profit.

Tosca premiered in Rome in 1900 and the story is set during Napoleon’s siege of Italy 100 years earlier. But the theme is timeless all the same. Scarpias can be found everywhere in the form of persons of power with a seemingly friendly demeanour – but the friendliness is only a means to gain control and take the upper hand.