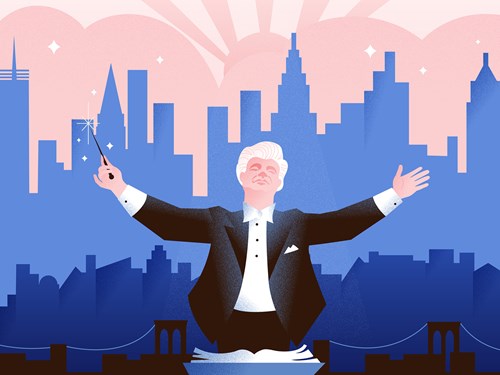 Journey to New York during a swinging concert with music by the master of musicals: Leonard Bernstein.
Buy

Imagine the sounds of New York City: jazz on the street corner, fast-paced and buzzing city streets, underground clubs and an air of exuberance!

Wonderful Town is all about an encounter with the city that never sleeps. We’re serving this high-energy musical together with excerpts from West Side Story and Candide – in what promises to be an unforgettable concert.

Bernstein’s breakthrough as a composer of musicals

Wonderful Town (1953) is set in the Bohemian district of Greenwich Village. Two young sisters have come here to pursue their artistic dreams. But before long, reality sets in, as they find themselves in a run-down basement apartment and a tough job market.

Greenwich Village was also briefly the home of Leonard Bernstein, who would later become one of the Masters of Musicals. Wonderful Town was his major breakthrough and he won no fewer than five Tony Awards, including for best musical.

Highlights from Westside Story and Candide

The concert opens with the overture from the operetta Candide (1956). After a fanfare, we are immediately catapulted into Bernstein’s sparkling universe.

In symphonic dances from West Side Story, we hear jazz and Latin timbres, as well as the well-known themes from the songs ‘Somewhere’ and ‘Maria’.