Astrid Lyngstad joined the Norwegian National Ballet in the autumn of 2019 after performing with the NNB 2 for two years. In 2020 and 2021, she made her debut in the main role in excerpts from La Sylphide and Swan Lake, as Juliet in the balcony pas de deux in Corder’s Romeo and Juliet and in the role of Moyna in the second act of Giselle.

In 2019, she was a soloist in Balanchine’s Valse-Fantaisie and danced in Espejord’s Some see stages on the NNB 2's tour to the Royal Opera House in London. She has also been a demi-soloist in Balanchine’s Symphony in C and also performed in his Serenade, and has done several roles in Holmes’ Swan Lake, MacMillan’s Manon, Cranko’s Onegin and Boyadjiev’s The Nutcracker. She has also danced in Ekman’s Cacti and Resin.

Lyngstad came in third in the Nordic Baltic Ballet Competition in Falun in 2017 and twelfth in the Youth American Grand Prix in New York that same year. As a child and ballet student, she danced in several of the Norwegian National Ballet’s productions, including Giselle and Serenade, and in the roles of snowflake and flower in The Nutcracker. She was three years old when she began studying at the Kirkenær ballet school. In 2011, she joined the Norwegian National Ballet School and studied ballet at the Ruseløkka secondary school before being accepted to the Oslo National Academy of the Arts in 2014. 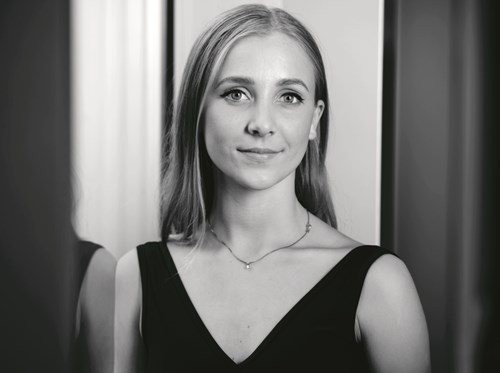