Freya Thomas Murzagaliyev joined the Norwegian National Ballet in 2018. When the Norwegian National Ballet was on tour in St. Petersburg that same autumn, she danced the role of Lilac in Hough’s Epic Short. The following year, she performed as one of the three Shades in La Bayadère and the role of Princess Sorokina in Spuck’s Anna Karenina. She has also danced as one of the four big swans in Holmes’ Swan Lake and several roles in MacMillan’s Manon, as well as performed in Scarlett’s Firebird, Moum Aune’s Hedda Gabler and various roles in Boyadjiev’s The Nutcracker. She has performed in Balanchine’s Symphony in C (first movement) and Theme and Variations, as well as one of the four female roles in Hough’s Bout of the Imperfect Pearl during the Baroque Mesteraften (A Night of Dance).

Before joining the Norwegian National Ballet, Murzagaliyev danced with the Bavarian State Ballet in Munich and has also performed in many of the Royal Ballet’s productions in her homeland. Her list of performances includes Makarova’s La Bayadère, Gregorovich’s Spartacus and Nijinska’s Les Biches, as well as solo parts in MacGregor’s Borderlands, Ek’s Giselle, Ratmansky’s Paquita, Cranko’s Romeo and Juliet and Ashton’s Birthday Offerings, in addition to pas de deux in Don Quixote. She has had roles created especially for her in Spanish Divertissement by Fabrice Edelmann and Man with a chair by Oleksii Busko and Terence Kohler created the role of Daphnis’ Mother for her in Daphnis and Chloe.

English Freya Thomas Murzagaliyev began dancing at the age of three. She is also a certified Pilates instructor. 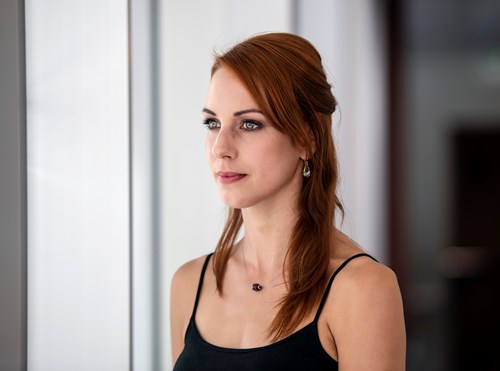