Rebekah Bloomfield joined the Norwegian National Ballet in 2020, after two years with the NNB 2. She has danced in Makarova's La Bayadère, Holmes' Swan Lake (e.g. Czardas), Boyadjiev's The Nutcracker, Balanchine's Serenade and Symphony in C, Spuck's Anna Karenina and Ekman's Cacti and Resin. With the NNB 2 she danced soloist couple in Andersen's Holberg Suite and in Heise's Dido and Aeneas, Edmonds' Left from Write and Balanchine's Valse-Fantaisie.

Canadian Bloomfield (born in 2000) began dancing at the age of eight in her hometown of Toronto and continued at the Norwegian National Ballet School (2012–2018). She danced the child’s role of Marie, equivalent to little Clara, in the National Ballet of Canada’s production of The Nutcracker in 2012. While a student, she danced the role of Little Red Riding Hood in Petipa’s Cinderella, Hope through love in Robert Binet’s Three Images of Hope – a part created especially for her – and in Balanchine’s Serenade, Bournonville’s A Folk Tale and Binet’s Surge. The latter was shown during the National Ballet of Canada’s ballet gala Mad Hot in 2017. 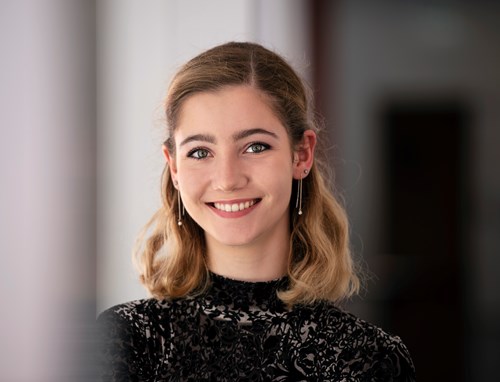